The National Newspaper: How the Sikh Food Bank is helping Scots communities 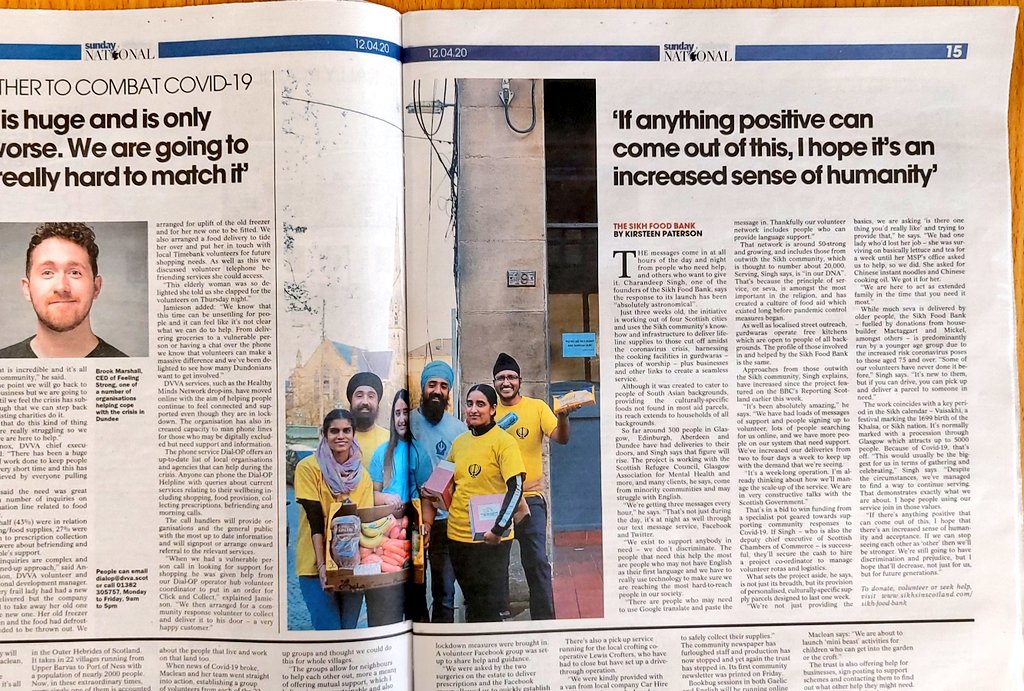 THE messages come in at all hours of the day and night from people who need help, and others who want to give it. Charandeep Singh, one of the founders of the Sikh Food Bank, says the response to its launch has been “absolutely astronomical”.

Just three weeks old, the initiative is working out of four Scottish cities and uses the Sikh community’s know-how and infrastructure to deliver lifeline supplies to those cut off amidst the coronavirus crisis, harnessing the cooking facilities in gurdwaras – places of worship – plus businesses and other links to create a seamless service.

Although it was created to cater to people of South Asian backgrounds, providing the culturally-specific foods not found in most aid parcels, its reach extends to households of all backgrounds.

So far around 300 people in Glasgow, Edinburgh, Aberdeen and Dundee have had deliveries to their doors, and Singh says that figure will rise. The project is working with the Scottish Refugee Council, Glasgow Association for Mental Health and more, and many clients, he says, come from minority communities and may struggle with English.

“We’re getting three messages every hour,” he says. “That’s not just during the day, it’s at night as well through our text message service, Facebook and Twitter.

“We exist to support anybody in need – we don’t discriminate. The people that need this help the most are people who may not have English as their first language and we have to really use technology to make sure we are reaching the most hard to reach people in our society.

“There are people who may need to use Google translate and paste the message in. Thankfully our volunteer network includes people who can provide language support.”

That network is around 50-strong and growing, and includes those from outwith the Sikh community, which is thought to number about 20,000. Serving, Singh says, is “in our DNA”. That’s because the principle of service, or seva, is amongst the most important in the religion, and has created a culture of food aid which existed long before pandemic control measures began.

As well as localised street outreach, gurdwaras operate free kitchens which are open to people of all backgrounds. The profile of those involved in and helped by the Sikh Food Bank is the same.

Approaches from those outwith the Sikh community, Singh explains, have increased since the project featured on the BBC’s Reporting Scotland earlier this week.

“It’s been absolutely amazing,” he says. “We have had loads of messages of support and people signing up to volunteer, lots of people searching for us online, and we have more people on our system that need support. We’ve increased our deliveries from two to four days a week to keep up with the demand that we’re seeing.

“It’s a week-long operation. I’m already thinking about how we’ll manage the scale-up of the service. We are in very constructive talks with the Scottish Government.”

That’s in a bid to win funding from a specialist pot geared towards supporting community responses to Covid-19. If Singh – who is also the deputy chief executive of Scottish Chambers of Commerce – is successful, they’ll secure the cash to hire a project co-ordinator to manage volunteer rotas and logistics.

What sets the project aside, he says, is not just its breadth, but its provision of personalised, culturally-specific supply parcels designed to last one week.

“We’re not just providing the basics, we are asking ‘is there one thing you’d really like’ and trying to provide that,” he says. “We had one lady who’d lost her job – she was surviving on basically lettuce and tea for a week until her MSP’s office asked us to help, so we did. She asked for Chinese instant noodles and Chinese cooking oil. We got it for her.

“We are here to act as extended family in the time that you need it most.”

While much seva is delivered by older people, the Sikh Food Bank – fuelled by donations from housebuilder Mactaggart and Mickel, amongst others – is predominantly run by a younger age group due to the increased risk coronavirus poses to those aged 75 and over. “Some of our volunteers have never done it before,” Singh says. “It’s new to them, but if you can drive, you can pick up and deliver a parcel to someone in need.”

The work coincides with a key period in the Sikh calendar – Vaisakhi, a festival marking the 1699 birth of the Khalsa, or Sikh nation. It’s normally marked with a procession through Glasgow which attracts up to 5000 people. Because of Covid-19, that’s off. “This would usually be the biggest for us in terms of gathering and celebrating,” Singh says. “Despite the circumstances, we’ve managed to find a way to continue serving. That demonstrates exactly what we are about. I hope people using our service join in those values.

“If there’s anything positive that can come out of this, I hope that there’s an increased sense of humanity and acceptance. If we can stop seeing each other as ‘other’ then we’ll be stronger. We’re still going to have discrimination and prejudice, but I hope that’ll decrease, not just for us, but for future generations.”

First published in the Sunday National on 12th April 2020. Article by Kirsteen Paterson