The Sikh Food Bank serves up 20,000 meals during Covid-19 lockdown 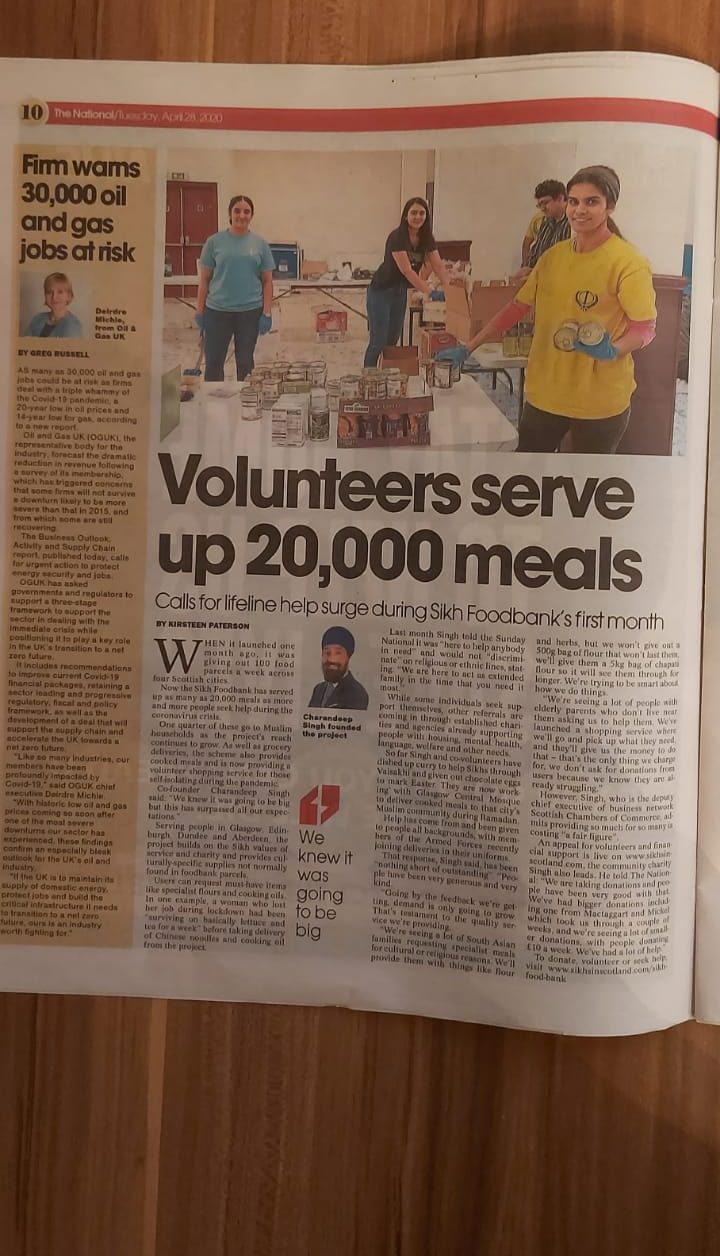 WHEN it launched one month ago, it was giving out 100 food parcels a week across four Scottish cities.

Now the Sikh Foodbank has served up as many as 20,000 meals as more and more people seek help during the coronavirus crisis.

One quarter of these go to Muslim households as the project’s reach continues to grow. As well as grocery deliveries, the scheme also provides cooked meals and is now providing a volunteer shopping service for those self-isolating during the pandemic.

Co-founder Charandeep Singh said: “We knew it was going to be big but this has surpassed all our expectations.”

Serving people in Glasgow, Edinburgh, Dundee and Aberdeen, the project builds on the Sikh values of service and charity and provides culturally-specific supplies not normally found in foodbank parcels.

Users can request must-have items like specialist flours and cooking oils. In one example, a woman who lost her job during lockdown had been “surviving on basically lettuce and tea for a week” before taking delivery of Chinese noodles and cooking oil from the project.

Last month Singh told the Sunday National it was “here to help anybody in need” and would not “discriminate” on religious or ethnic lines, stating: “We are here to act as extended family in the time that you need it most.”

While some individuals seek support themselves, other referrals are coming in through established charities and agencies already supporting people with housing, mental health, language, welfare and other needs.

So far Singh and co-volunteers have dished up curry to help Sikhs through Vaisakhi and given out chocolate eggs to mark Easter. They are now working with Glasgow Central Mosque to deliver cooked meals to that city’s Muslim community during Ramadan.

Help has come from and been given to people all backgrounds, with members of the Armed Forces recently joining deliveries in their uniforms.

That response, Singh said, has been “nothing short of outstanding”. “People have been very generous and very kind.

“Going by the feedback we’re getting, demand is only going to grow. That’s testament to the quality service we’re providing.

“We’re seeing a lot of South Asian families requesting specialist meals for cultural or religious reasons. We’ll provide them with things like flour and herbs, but we won’t give out a 500g bag of flour that won’t last them, we’ll give them a 5kg bag of chapati flour so it will see them through for longer. We’re trying to be smart about how we do things.

“We’re seeing a lot of people with elderly parents who don’t live near them asking us to help them. We’ve launched a shopping service where we’ll go and pick up what they need, and they’ll give us the money to do that – that’s the only thing we charge for, we don’t ask for donations from users because we know they are already struggling.”

However, Singh, who is the deputy chief executive of business network Scottish Chambers of Commerce, admits providing so much for so many is costing “a fair figure”.

An appeal for volunteers and financial support is live on www.sikhsinscotland.com, the community charity Singh also leads. He told The National: “We are taking donations and people have been very good with that. We’ve had bigger donations including one from Mactaggart and Mickel which took us through a couple of weeks, and we’re seeing a lot of smaller donations, with people donating £10 a week. We’ve had a lot of help.”

First Published in The National on 28th April. Available online at https://www.thenational.scot/news/18409282.sikh-foodbank-serve-20-000-meals-coronavirus-lockdown/