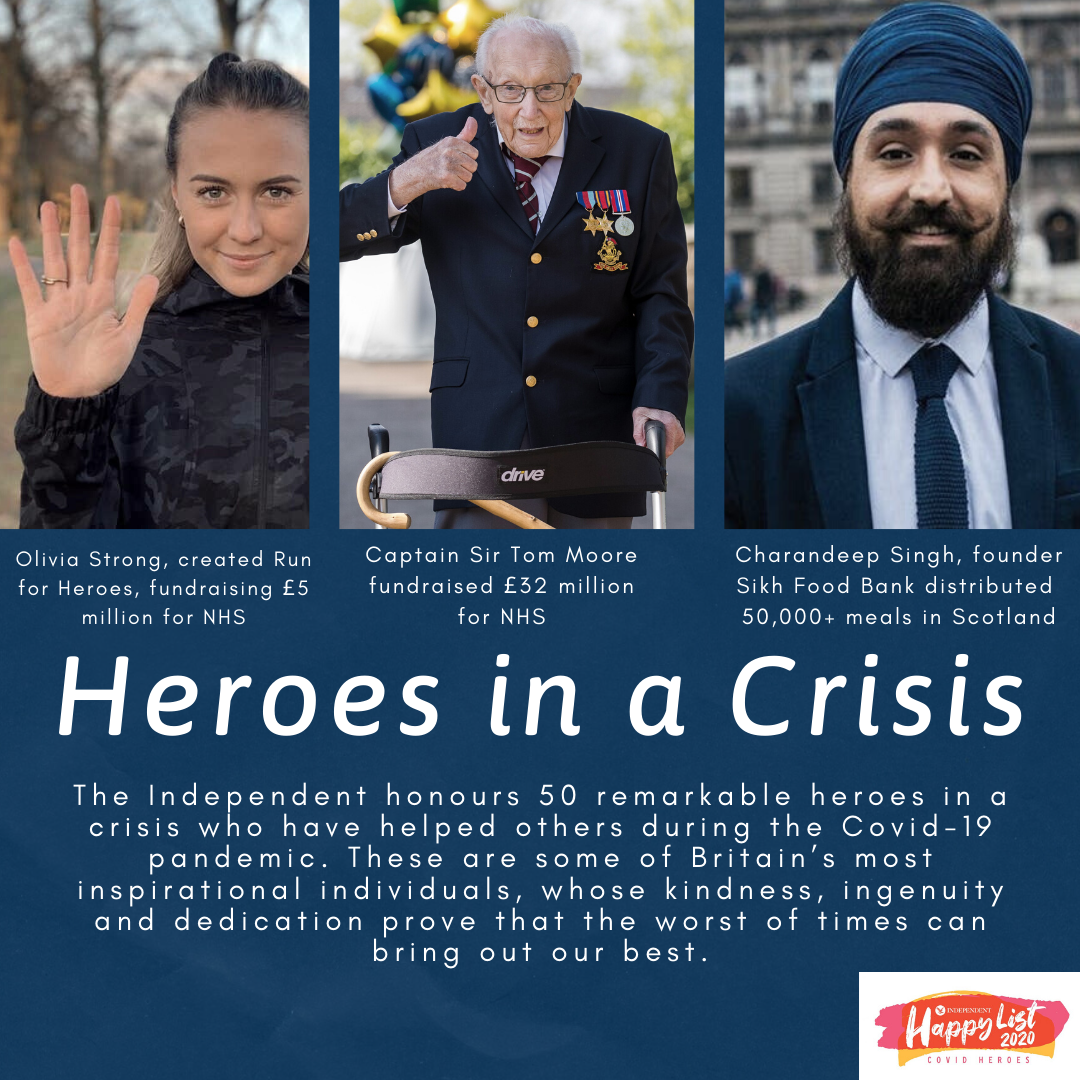 Meet Britain’s happiness-spreading heroes: let’s celebrate the people doing remarkable things in response to the pandemic, as nominated by you.

The Independent publishes its annual Happy List, which this year honours 50 remarkable heroes in a crisis who have helped others during the Covid-19 pandemic. These are some of Britain’s most inspirational individuals, whose kindness, ingenuity and dedication prove that the worst of times can bring out our best.

The 50 people here have been chosen by a panel from scores of nominations from you, the readers of The Independent. We received so many examples of people doing extraordinary things without thought of personal gain, and acts of kindness uniting communities. A huge thank you to everyone who played a part.

Christian Broughton, editor of The Independent, says: “In this time of such extraordinary turmoil, extraordinary characters have stepped up to make a difference. This year’s Happy List is devoted entirely to exactly these people – from carers who have risked their lives to save others, to fundraisers who have brought hope and comfort. We can’t possibly celebrate everyone who deserves credit, but those on this list deserve our recognition and our gratitude. Our thanks to them all – and to those who nominated such a broad and uplifting crowd.”

The Sikh Foodbank went from handing out 100 or so food parcels a week to serving up 20,000 meals as more and more people sought help during the crisis. The project organises the delivery of grocery packs and cooked meals, and provides a volunteer shopping service for those self-isolating. Singh, who is deputy chief executive of the Scottish Chambers of Commerce and lives in Glasgow, was inspired by Sikh values of community service, but the food bank is available to anyone, and most of the weekly deliveries in Glasgow, Edinburgh, Dundee and Aberdeen are to non-Sikhs.

No list of heroes would be complete without the war veteran who not only raised more than £32m for NHS charities, but also inspired a slew of other fundraisers. Captain Tom captured the hearts of the nation by walking 100 laps of his garden before his 100th birthday on 30 April, with Boris Johnson describing him as “a beacon of light through the fog of coronavirus”. The centenarian was then awarded a knighthood for his fundraising efforts. One of the great many who nominated him says: “Sir Tom made a lot of people very happy, exactly when we needed a lift.”

Back in March runner Olivia Strong, 27, from Edinburgh, created the Run for Heroes 5km challenge, aiming to raise £5,000 for the NHS. The idea was simple – she knew more people were out running, so why not get them to run 5K, donate £5 to the NHS and then challenge five of their friends to do the same, using #runforheroes. The challenge instantly went viral, with people all over the world taking part, including Mo Farah and Ellie Goulding. It has now raised over £5m for NHS charities.