Pride of Scotland Award for The Sikh Food Bank 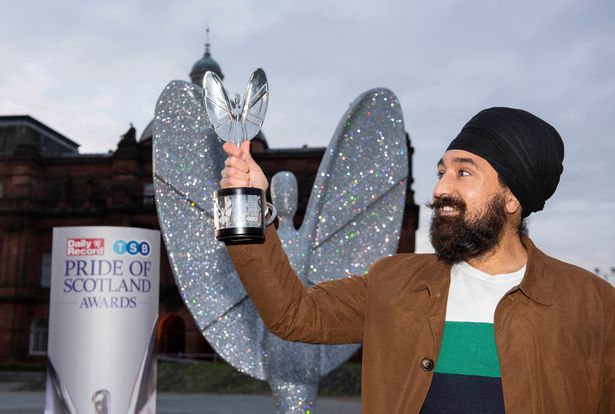 THE co-founder of The Sikh Food Bank has received a Pride of Scotland award for his work helping to deliver 100,000 meals to families in need through the coronavirus pandemic.

Charandeep Singh, 30, was given a Special Recognition Award at the inaugural event, at which he was described as a “truly influential force” in Scotland.

Singh, who is also the deputy chief executive of the Scottish Chambers of Commerce, launched the food bank in late March with the aim of helping shielding and struggling households from all backgrounds.

With its team of 50 volunteers, the project has provided basics and culturally specific groceries not typically available in food bank parcels to people across Glasgow, Edinburgh, Dundee and Aberdeen.

She said: “Charandeep is a truly influential force in Scotland breaking barriers in business and in charity. His incredible passion, dedication and commitment to helping others has made a real difference to communities across Scotland.

“On top of his day job, Charandeep spearheaded the  delivery of over 100,000 meals to people in need across Scotland throughout the pandemic.

“Charandeep is a true role model and inspiration to us all. We are immensely delighted he has received this tremendous recognition.”

Singh said he was “so very humbled” to receive the Pride of Scotland recognition.

“This has been an exceptionally tough year for us all and I am honoured to have played my part in helping our communities,” he commented.

“I couldn’t have done this on my own and I dedicate this award to all the volunteers, supporters and donors who continue to support The Sikh Food Bank.”

The Daily Record today unveiled a list of “awe-inspiring” Scots who will be recognised at the Pride of Scotland Awards on Hogmanay.

The event, which will be broadcast on STV, will also see rugby icon and MND fundraiser Doddie Weir and Dame Laura Lee, the founder of Maggie’s Centres, honoured.

First published by The National on 18th December 2020. Click here for article