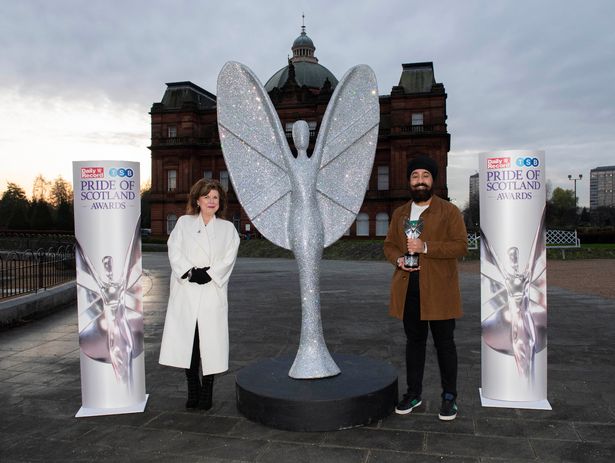 He’s the man who organised a mass foodbank and throughout lockdown has helped many a man, woman, and child.

Charandeep Singh, the man behind the Sikh Foodbank, utilised the facilities at the Gurdwara to help thousands of people across the country. As well as instilling this, he ensured that the pillars of the Sikh faith through Guru Nanak’s message (pray, work, and share one’s wealth) was in everything that they did. And now – he’s won a Pride of Scotland award, presented to him by Elaine C. Smith.

“It’s so overwhelming to have won this” Charandeep told Glasgow Live.

“I’ve dedicated the prize to the other volunteers who helped us. To be recognised by others throughout the UK is so special, and for others who have done great work to know the work we’re dong and commend us has been a huge boost.

“It’s for the people we support as well. I think it shows that we’re in this together and we’re going to get through it together.”

Since March the Sikh Foodbank has organised the delivery of groceries and cooked meals, as well as providing a volunteer shopping service for those who are self-isolating and a check-in phone service, available in English, Panjabi, Hindi and Urdu, to help combat loneliness and isolation.

Supported by a 50-strong team of Sikh volunteers, Charandeep led the delivery of meals and food parcels to families across Glasgow as well as in Edinburgh, Dundee and Aberdeen. Today it’s estimated they’ve delivered around 100,000 meals.

“We started the foodbank in March because there was the need and the scale has been astronomical” said Charandeep.

“We always said that we’d keep it going while we still had the need for it and I think it’ll be there in the near future.”

“We always need support and volunteers, always. I’m only one person and we can’t do it without them.

“For people it is a lifeline and its the volunteers that have helped to make it happen. A call out is always answered. I think they’re extraordinary, they’ve never said no – and you can only do it with the community which you’ve got.”

Charandeep says that his work with the Foodbank has really helped him learn about the greater Sikh community in Glasgow, who have helped anyone no matter what race, religion or creed, who has needed it.

“Personally, I think the Sikh community has stood up and been present when needed the most.

“We’ve implemented the values of the faith and I’m so pleased that in 2020 we were really able to do that. Practising Sikh faith isn’t just about praying but about building our spiritual resilience and then showing that in the community. Other than that it’s just not enough.

“Thats the biggest thing for me – we didn’t shut our doors down, despite there being the lockdown, we used our faith and values and helped people – and for me that was the biggest contribution that we all did that something we could to help.

“We all have a role to play, a skillset, something to add to the community.”

Now, though, Charandeep is still working his day job and is still waiting on that time to process what he’s achieved.

“I haven’t had much time to reflect” he said.

“I’m hoping over the Christmas break I’ll be able to sit down and take heed. To get the award for the charity was humbling and amazing. We just need to think of what we’re doing next!”